What are we to do with all this rubbish?

I'm lucky enough to live on the Sefton coast, a vast stretch of mobile sand dunes and sandy beaches where, in the cooler months, flocks of waders make shimmering inspirations in the sky.

Sadly, sometimes the summer visitors and day trippers, are less appreciative of this precious environment than the hungry waders, and often leave huge amounts of litter behind. This litter then has to be gathered in beach cleaning exercises, but once this is done, what are we to do with all this rubbish?

Well, I had an idea…. how about making it into art? Transforming beach litter into a work of art that celebrates the amazing array of life that can be found out in our Irish Sea. 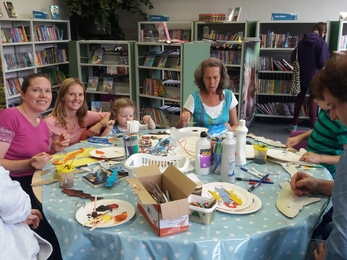 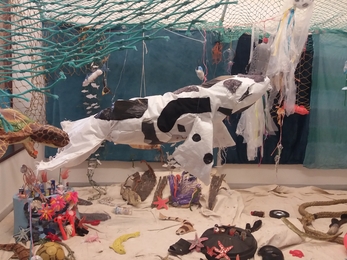 Seal made from potato sacking, old socks and a hairbrush 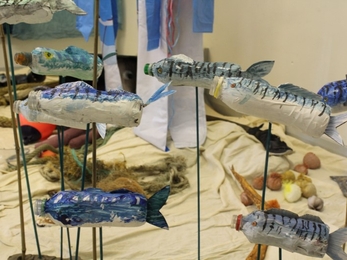 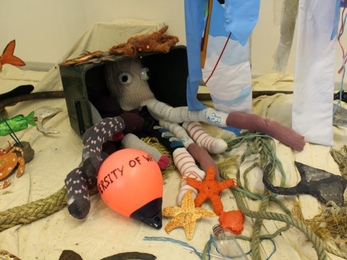 The thought behind this idea was to create various models of marine species (litter critters) using litter collected along the Sefton coast for over a year, and then use these to build an art installation illustrating the regeneration of the Irish Sea seabed which has been damaged by many years of dredging and over fishing.

I worked in partnership with Sally Tapp the Lancashire Wildlife Trust’s Marine Community Engagement Officer, who regularly holds events along the coast to show people the variety of life living both under the water and on the shore, including under the muddy surface.

Over the last decade, The Wildlife Trusts have tirelessly campaigned for the designation of Marine Conservation Zones (MCZs) in the Irish Sea and around the country to protect special areas at sea that support a vast array of important species and habitats. The Irish Sea currently has four MCZs and we are awaiting the Government’s announcement on six more recommended MCZs in the new year.  We wanted to show how protection of these areas could help to restore the Irish Sea to a thriving environment full of native wildlife once more.

Once the seed was sown, the idea grew and it was decided that a film using time lapse photography should be made of the whole process, showing the evolution of the installation and how vital areas at sea would regenerate if left alone to flourish without any damaging activities.

Our seas are full of bright, colourful, charismatic creatures but decades of damaging activities, including pollution and overfishing, have put pressure on these animals and their home and created barren underwater landscapes dominated by litter. If we continue to damage our marine environment, its beauty and wildlife will be lost. However, if we act more responsibly, then all our seas could look like our art installation
Sally Tapp
Lancashire Wildlife Trust

We held four weeks of marine art workshops over the beginning of the school holidays at three very supportive local libraries, Bootle, Formby and Crosby. Over 240 local children and adults contributed to the installation and some library staff joined in as well. It was at Crosby library that we housed the final installation and the library staff helped to erect the marquee frame, ferry things around and made a variety of animals including bottle fish, sea potatoes and scallops. After much gluing, sewing and painting, we had plenty of marine creatures, a large enough space to build the installation and a gazebo frame to hold a net to suspend creatures from, so we were just short of a good size net.

Luckily the internet led me to Ghost Fishing UK (www.ghostfishing.org/uk), and after a few e-mails, a perfectly sized net arrived, and as you can hopefully see in the pictures, performed a sterling service as the surface of the sea.

Once the filming was complete we held an open day with tea and cake for everyone who helped us make the creatures to come and view their creations in their new environment.

The sea potatoes were made from net bags that are used in cockle ‘harvesting’ and stuffed with old duvet filling. They were one of the favourites with children, partly I think, because of the name. It was decided that the collective noun for sea potatoes should be a roast, and I think more people will now be able to identify them out on their beach strolls!
Gail Pickett

The result was an underwater scene that could easily be mistaken for a tropical ocean but every creature on display makes its home in our Irish Sea. It’s full of marine wildlife, from well-known species like turtles, dolphins and jellyfish to the weird and wonderful sea potato and ocean quahog which were all represented in the installation.

The aim of creating this art piece and film was to highlight the variety of life in the Irish Sea and its resilience if we give it the chance to recover from past stressors, but also, it sends a sobering message about the amount of litter on beaches that ends up polluting our sea and coastline. Everything you can see in the film was made from litter collected from our local coast over the last year, with the only exception being papier mâché and cardboard cut-outs.

Thanks to the Sefton libraries for their support, Fred from Ghost Fishing UK for sending the net, everyone who made a creature to add to our shoal, and thank you too to anyone helping to remove litter of whatever kind from our waters.